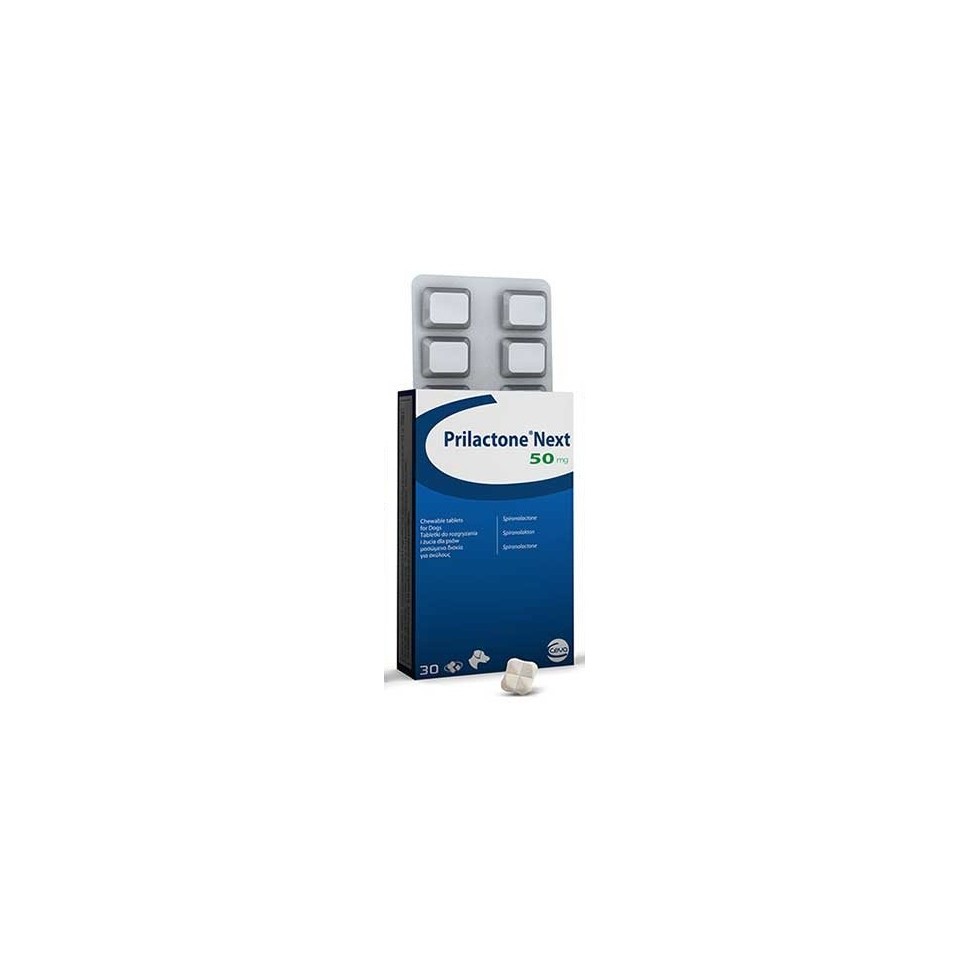 For use in combination with the usual treatment (including the complementary use of a diuretic if necessary) for the treatment of congestive heart failure caused by a degenerative mitral valve disease in dogs.

In non-castrated males, reversible atrophy of the prostate is frequently observed. Vomiting and diarrhea are common.

If you notice any serious effect or not mentioned in this leaflet, please inform your veterinarian of it.

DOSAGE FOR EACH SPECIES, MODE AND ROUTE (S) OF ADMINISTRATION

2 mg of spironolactone per kg of weight once a day. The veterinary medicinal product must be administered with the food.

INSTRUCTIONS FOR A CORRECT ADMINISTRATION

The tablets have flavors. In the case that the dog does not take the tablet of the hand or the bowl, the tablets can be mixed with a small amount of food before the main meal, or administered directly in the mouth after feeding. As the food significantly increases the oral bioavailability of spironolactone, it is recommended to administer the veterinary drug during meals.

Special precautions for use in animals

Renal function and serum potassium levels should be evaluated before initiating the combined treatment with spironolactone and ACE inhibitors. Unlike humans, this combination did not show a higher incidence of hyperkalemia in clinical trials in dogs. However, in dogs with renal dysfunction, regular monitoring of renal function and serum potassium levels is recommended since there may be an increased risk of hyperkalemia.

Dogs treated concomitantly with spironolactone and NSAIDs should be properly hydrated. Monitoring of renal function and serum potassium levels is recommended before and during treatment with combination therapy (see "Contraindications).

Spironolactone has an antiandrogenic effect, so it is not recommended to administer the veterinary drug to dogs in the growth phase.
Spironolactone undergoes extensive hepatic biotransformation, so it will be administered carefully in dogs with hepatic dysfunction.

May cause skin sensitization: people who are allergic to spironolactone or other components of the formulation should not handle the veterinary medicinal product.

The veterinary medicinal product must be handled with great care to avoid unnecessary exposure, so all recommended precautions should be taken.

Wash your hands after use.

If you develop symptoms after exposure such as rash, consult a doctor and show him the package leaflet. Inflammation of the face, lips or eyes or difficulty breathing are more serious symptoms that require urgent medical attention.

In case of accidental ingestion, consult a doctor immediately and show him the text of the package or the package leaflet.

Use during pregnancy, lactation or lay

Developmental toxicity has been observed in laboratory animals with spironolactone. The safety of the veterinary medicinal product in pregnant or lactating bitches has not been demonstrated.
Do not use during pregnancy and lactation.

Interaction with other medicinal products and other forms of interaction

In clinical studies, the veterinary drug was administered in conjunction with the ACE inhibitors, furosemide and pimobendan, with no associated adverse reactions.

Spironolactone decreases the elimination of digoxin and therefore increases the plasma concentration of it. Given that the therapeutic index for digoxin is very narrow, it is recommended to carefully monitor those dogs that receive digoxin and spironolactone.

Spironolactone could cause both the induction and inhibition of cytochrome P450 enzymes and could, therefore, affect the metabolism of other drugs that use these metabolic pathways.

After an administration of up to 5 times the recommended dose (10 mg / kg) to healthy dogs, adverse effects were observed depending on the dose, see section "Adverse reactions".
In case of accidental mass ingestion by the dog, there is no specific treatment or antidote. Therefore, it is recommended to induce vomiting, proceed to a stomach wash (depending on the risk assessment) and monitor the electrolytes. Symptomatic treatment, such as fluid therapy, should be provided.

26 other products in the same category: